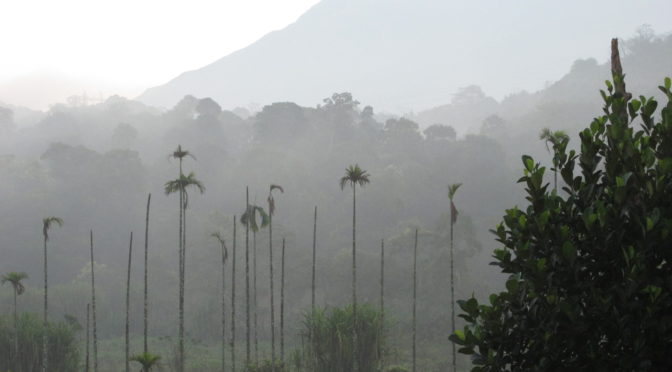 Shortly before Christmas 2015 I rented out a brand new Royal Enfield Bullet 350 and took my 2nd trip into Wayanad.

This was the first time I’d driven a Bullet and I loved the ride so much that I did very little on the trip apart from driving.

I left Bangalore on the night of the 23rd December and stopped over at Mysore. Left early the next morning towards Kalpetta. I came up with two rules for the trip: no highways and no traveling the same route more than once.

I drove through Nagarahole with my heart in my mouth and passed Kalpetta just before noon. I took a room at Lakkidi Grace Tourist Home; some pretty nice views from the 1st floor rooms here and lunch was Kerala fish curry meals.

I had to return to Bangalore the next morning itself due to some unexpected change in circumstances at home. So I slept well. Even though I did not get to see many places I was glad for the ride.

Christmas morning. This turned out to be the most beautiful Christmas I’d had in quite a while. I stopped at a church near Kalpetta.

I looked up Google Maps to come up with a suitably interesting route while aiming to reach Bangalore late in the evening.

Gonikoppal. Beautiful name and the place is even more so. The roads, the homes, the little church… I stopped by to take a picture of this house which is just opposite a beautiful little church. More about that church later on.

I hit a very bad patch of road near Anechowkoor which was nothing more than mud and gravel. This is where the RE350 earned its keep. It just kept moving like a thick-skinned pig unconcerned with all the punishment.

I received a call from Lakkidi Grace saying I’d left my keys under the pillows. I told them to hold on to the keys and that I’ll be returning in a couple of hours. Now I had a reason to avoid returning to Bangalore the same day and I could stop by all those places where I had wished I had more time to take photos!

So here is the church at Gonikoppal I spoke about earlier. Now there was enough time to take some pics and look around. It’s hard to leave this place.

And then I loafed around and taking only those roads I had not passed previously I found probably the most roundabout way to reach Lakkidi. Ask anyone from that part of the country and they will agree that when going from Gonikoppal to Lakkidi one really has no business going to Iritty. But I did pass through Iritty that day and have photos to prove it! \o/

Reached Lakkidi, collected my keys and drove around all evening before a good night’s sleep. And next morning I was off again, and yes I again had to find a route avoiding roads I had taken before.

I passed through a place called Vellimunda just as it was explaining its name to the world. Look at it!

I did break the no highways rule by returning via Yediyur. But no regrets. Got home to Christmas sweets, Christmas stories and Christmas wine.

It has taken me nearly 2 years to get my lazy self to put this down on a blog post. A few more road trips have been undertaken since, some routes traveled repeatedly, some on highways too but for the most part I still stick to these few rules: